YFI crashed towards $12,000 on Thursday and unconfirmed evidence shows that Sam Bankman-Fried was behind the plunge.

In retrospect, Cream is an Ethereum-based lending platform that allows users to borrow or lend from a pool of assets. Mr. Bankman-Fried allegedly used their service to borrow three decentralized finance tokens: UniSwap’s UNI, Curve’s CRV, and Yearn Finance’s YFI.

“If you want to look for yourself, the [Cream] wallet might be Alameda’s [a cryptocurrency trading firm also founded by Mr. Bankman-Fried] because it has $72M in FTT,” noted Julien Thevenard, an investor with Fabric Ventures in London.

“They have borrowed 2.7M UNI + 165 YFI (+ no CRV) yesterday and sent them to Binance/ They have repaid 1.3M UNI since. Interestingly they hold 14M Sushi there,” he added.

One of the screenshots then showed the CEO in conversation with an unidentified individual. In there, the anonymous person can be seen asking Mr. Bankman-Fried that whether or not he would short “UNI and YFI,” to which Mr. Bankman-Fried responds: “perhaps” followed by a smiley. 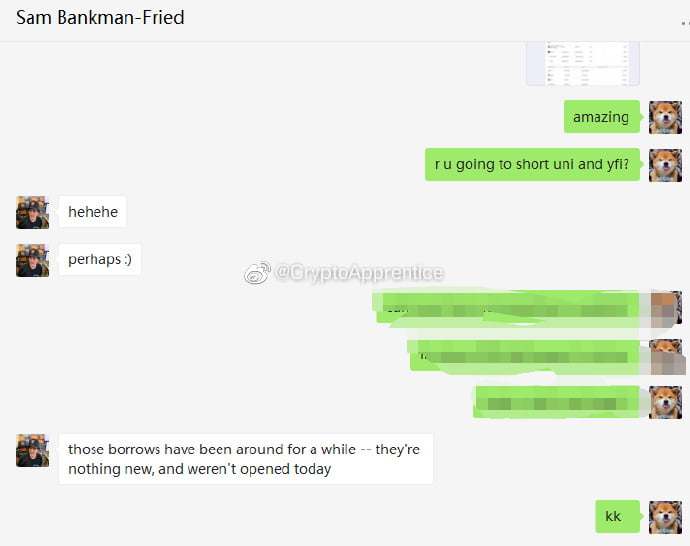 Mr. Bankman-Fried has not released a clarification or response to the said allegations so far.

None of the screenshots showed the exact date on which Mr. Bankman-Fried discussed his plans to short YFI. Nevertheless, with the Yearn Finance token dropping in eight out of ten daily sessions, the community smells a rat.

It is also because Mr. Bankman-Fried allegedly commits that he borrowed UNI and YFI tokens earlier, without mentioning the date, however. Meanwhile, YFI has now crashed by almost by 64.34 percent from its September 27 high of $34,272. Another factor that has contributed largely to the YFI breakdown is Andre Cronje, the founder of Yearn Finance. Not too long ago, he founded ‘Eminence’ (EMN), a project that lost about $15 million to hackers even before the launch.

“The main reason IMO was Yearn’s blatant negligence around the EMN launch, and how poorly the aftermath was handled. Said so when it happened, not in hindsight later. Many exited/reduced YFI positions because of it.”

The total value locked inside the Yearn Finance pool now stands near $600 million, a 40 percent drop from its all-time high.

Chainlink (LINK) was soaring high in the early European trading session Thursday as traders continued to seek hedge in the...

Chainlink (LINK) dipped below $22.00, but it stayed above $20.00, whereas bitcoin and Ethereum struggled. The price is now rising...

Why Ethereum Close Above $1,300 Could Spark A Fresh Surge

Bitcoin Bulls Protecting $30K, Why BTC Could Correct above $32K

Bitcoin price extended its decline below $31,000 and $30,000 against the US Dollar. BTC is correcting higher and it seems...

For months, Bitcoin stole the show when it came to crypto, sucking the capital out of the altcoin market. Shortly...

A Dangerous Technical Pattern In Bitcoin Is Back, And It Is Breaking Down

Dogecoin to 1 dollar? Reddit turns to DOGE after GameStop surges 1,600% in 2 weeks

Blockchain learning made easy via Ivan on Tech Academy