Bitcoin price is once again making headlines on mainstream media outlets, revisiting once forgotten memories of the crypto bubble of 2017, where Bitcoin’s meteoric rise captured the interest of the world and took it to its all-time high of $20,000.

Just this past week, $10,000 was reclaimed by Bitcoin – a price point that last time around created widespread FOMO and caused investors to flock to this space.

After the new level was taken, the monthly Bitcoin price chart is forming a “three white soldiers” candlestick formation that typically signals in financial assets a strong reversal. But Bitcoin isn’t any regular financial asset, and Bitcoin’s trend reversal may be the strongest ever witnessed by humankind, according to one crypto analyst.

Many people know by now that Bitcoin is the fastest rising asset in human history, with no other asset providing investors with more profits had they bought in at its inception than the first ever cryptocurrency. Everyone always wishes they bought more – even buying consistently through dollar cost averaging since the Bitcoin top would have led investors to profit.

But it’s also capable of extreme price crashes with each subsequent “bubble” pop, eliminating as much as 85%+ in value each time it happens. Each time it’s also pronounced dead, but makes a triumphant comeback that ultimate draws in more investors than the previous cycle. 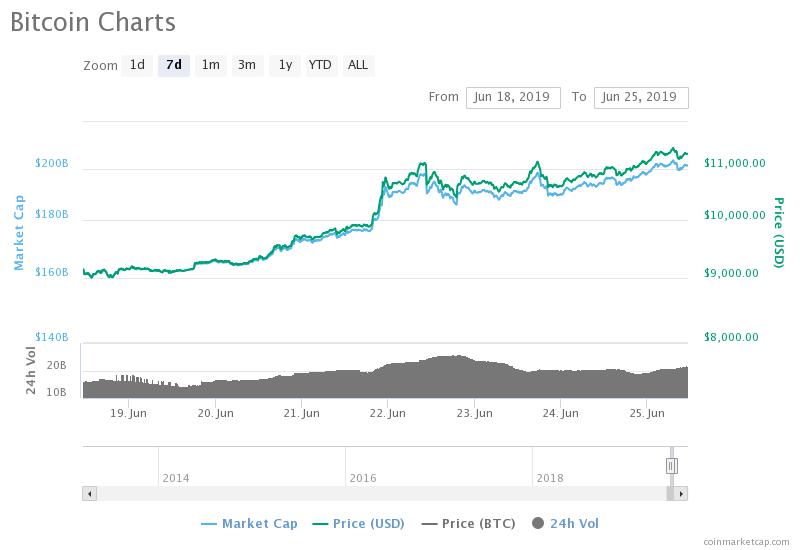 After such a brutal bear market, that some believe included an over-correction below $6,000 to extreme lows and fear, an incredibly powerful reversal has occurred. Bitcoin, from its deepest, darkest lows, has surged over 250%, reclaimed important price levels such as $10,000 and is already setting its sights on reclaiming its previous all-time high – a price it’s already regained as much as 75% of in the recent months.

As the leading crypto asset by market cap shows no signs of stopping, if the current monthly candle closes in the green, Bitcoin will have printed a bullish chart pattern setup called “three white soldiers,” and one crypto analyst calls this and Bitcoin’s powerful rebound the “strongest trend reversal of an asset [the] human race has ever experienced,” and it may only just be getting started if the candle structure closes with a clean three white soldiers.

This is probably the strongest trend reversal of an asset human race has ever experienced and it’s just getting started. #bitcoin pic.twitter.com/GCm8JSATv6

According to Wikipedia, the bullish candlestick pattern “unfolds across three trading sessions and suggests a strong price reversal from a bear market to a bull market.”

“The three white soldiers help to confirm that a bear market has ended and market sentiment has turned positive,” Wikipedia reads.

Published author and technical analyst Gregory L. Morris says that this sort of price pattern is so bullish, it “should never be ignored.”