Facebook, the social media giant, is the newest member of the crypto world after it officially launched its whitepaper on its website today. Facebook introduced its cryptocurrency, Libra, which will be built on the Libra blockchain.

“For example, Calibra will have a dedicated team of experts in risk management focused on preventing people from using Calibra for fraudulent purposes. We’ll provide fraud protection so if you lose your Libra coins, we’ll offer refunds. We also believe it’s important for people to have choices so you’ll have the options to use many other third-party wallets on the Libra network.” 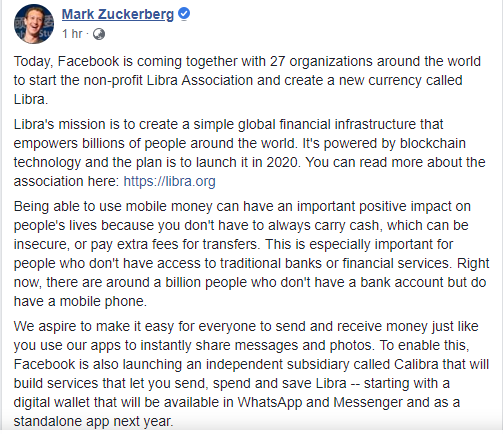 Zuckerberg concluded his post by expressing his gratitude to all organizations and institutions that have partnered with the Libra Association. Presently, some noted “backers” of the Libra project include Uber, Visa, MasterCard, Spotify, Coinbase, Lyft, Paypal, among others.

Changpeng Zhao, Founder and CEO of Binance, was sarcastic with his reception. He claimed that Facebook’s Libra Coin won’t need any KYC, in an apparent dig at Facebook’s alleged history of storing, sharing and circulating private information of users.

Facebook Libra coin don’t need KYC. They have so much more data on the 2 billion people. Not just name, id, address, phone number. They know your family, friends, real-time/historic location, what you like… They know you more than yourself. And now your wallet too. Best AML!

Popular analyst, eToro’s Mati Greenspan saw the funny side too as he shared a screenshot of Facebook’s Calibra website going down following a surge in traffic. “Welcome to Crypto Facebook,” he said, taking a shot at Facebook’s own servers that have struggled in the past with traffic surges.

Noted crypto-trader, Alex Kruger, took a more critical look at Libra’s whitepaper. He claimed that the carefully worded whitepaper while promoting Libra, implied that cryptocurrencies such as Bitcoin do not have intrinsic value, while fiat currencies do.

Based on the for sure carefully chosen words of the whitepaper, the Libra Association wants the world to believe that fiat currencies have intrinsic value, while cryptocurrencies such as bitcoin do not.

Likely a conscious attack on crypto to differentiate the Libra Currency. pic.twitter.com/UAlwcXZ2YV

TRON Foundation’s Justin Sun however, predicted FOMO and an incoming bull run. Sun’s prediction was in line with several other analysts who believe that Facebook’s huge user base will be key to the fortunes of the social media giant-backed crypto.

Facebook and #LIBRA. I feel a huge #FOMO and bull run for crypto is on its way.

Peter Todd was clearly unhappy with Facebook’s Libra as well, claiming that it was an “unscalable centralized database” that was equivalent to “giving the finger to government authority.”

I think it’s safe to say Facebook’s Libra is massive tech companies giving the finger to government authority and power, claiming it for themselves and themselves only.

Anthony Pompliano, Co-founder of Morgan Creek Digital, was more reserved with his feelings for Facebook’s new venture, while applauding Facebook’s ambition behind the project.

“Libra’s mission is to enable a simple global currency and financial infrastructure that empowers billions of people.”

Facebook just announced their cryptocurrency and they never shy away from world-changing ambition.

European politicians have also reacted to Facebook’s new cryptocurrency, Libra. In an interview with Europe 1 radio, French Finance Minister, Bruno Le Maire, stated that Libra shouldn’t be seen as a replacement for traditional currencies. He said,

“It is out of question that Libra become a sovereign currency.It can’t and must not happen.”

Le Maire also called on the Group of Seven to prepare a report on Facebook’s project for their July meeting.

Markus Ferber, a German member of the European Parliament, advised caution and skepticism. He stated,

“Facebook, with more than 2 billion users, could become a “shadow bank” and that regulators should be on high alert.”