XRP/GateHub: Hacker continues to prowl the market as part of stolen XRP transferred to Digifinex

XRP, the third largest cryptocurrency by market cap, was the highlight of the cryptocurrency space after a hacker stole a significant amount of coins from GateHub, a wallet that supports the top cryptocurrencies in the market. Nearly 23 million XRP were stolen from the platform via an attack by the hacker earlier this month.

The service provider stated that this could have been the cause of “suspicious API calls” in its initial statement, adding that they did not find any loopholes on the platform that would have enabled the hacker in carrying out the attack.

Keeping this aside, the hacker has been moving around the stolen funds to several exchange platforms. Earlier today, according to Whale Alert, the hacker moved 30,000 XRP equivalent to $13,055 to DigiFinex, an exchange platform headquartered in Singapore. The transfer was made from rDBneo78RVCfMdAbvPo4v2sf8uk3RKKe1b address to DigiFinex’s rnG2XVwdULE5mfWA5EFxnyTkUGgg2K39AP address at 09:05:41 UTC on June 17, 2019.

Notably, this was not the only transaction made by the hacker to DigiFinex. On June 16, two transfers were made to DigiFinex at 17:01:51 UTC and 17:27:31 UTC from rfrnAC417ewiPbRqRzvJCgnBSgMJRMzSuv address. The XRPs that were transferred were worth $28,590 at the time of transfer. Apart from this, Whale Alert also recorded transactions made to different addresses yesterday. 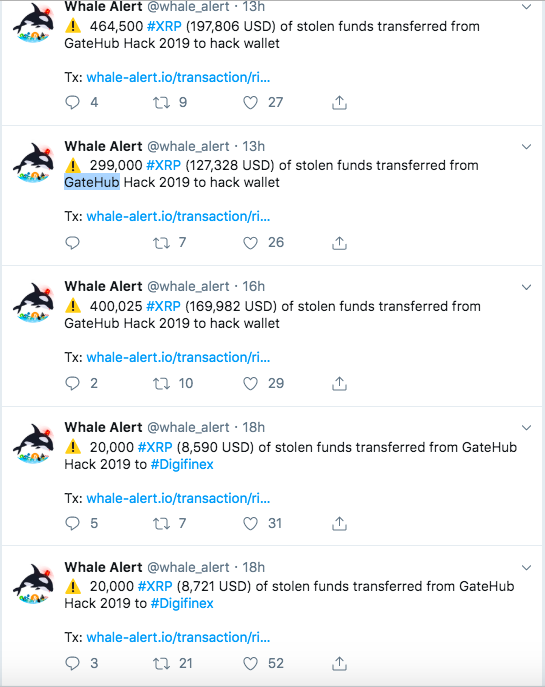 DigiFinex was not the only exchange platform the stolen funds were transferred to. According to previous transactions recorded by Whale Alert, the hacker has sent some funds to Bitfinex and OkEx over the past few days. Another cryptocurrency exchange, ChangeNOW, recently released a statement surrounding the hack, stating that the attacker had sent some funds to their exchange platform as well. The exchange added that it was able to secure some of the stolen funds, which would be later sent back to GateHub.

Priya is a full-time member of the reporting team at AMBCrypto. She is a finance major with one year of writing experience. She has not held any value in Bitcoin or other currencies.