Whales have become regular members of the Bitcoin [BTC] market, often moving larger quantities of the top cryptocurrency between exchanges, and piquing the interest of the community. While these large-scale transfers spur market sentiment and at time hints at suspicious activity, the other end of the spectrum often goes unnoticed, the wallets with relatively meager Bitcoin.

A recent report from the cryptocurrency analytics firm, Longhash pointed to a notable divergence of Bitcoin addresses that show amass small quantities of the cryptocurrency, causing a bottleneck of sorts. The report, citing data from BitInfoCharts, detailed that over 18 million BTC addresses held over $1 but less than $100 of the top cryptocurrency.

Longhash stated that the reason for this bottleneck of sorts was the digital assets’ “transaction fees,”

“As the result of current transaction fees, however, these users may be hesitant to send payments with Bitcoin.”

In reference to the above only one-third of the above figure, or 6.1million address held between $100 and $1,000 worth of Bitcoins. The total number of addresses drops by over 62 percent when looking at the addresses holding between $1,000 to $10,000 of BTC, which are about 2.29 million in number. 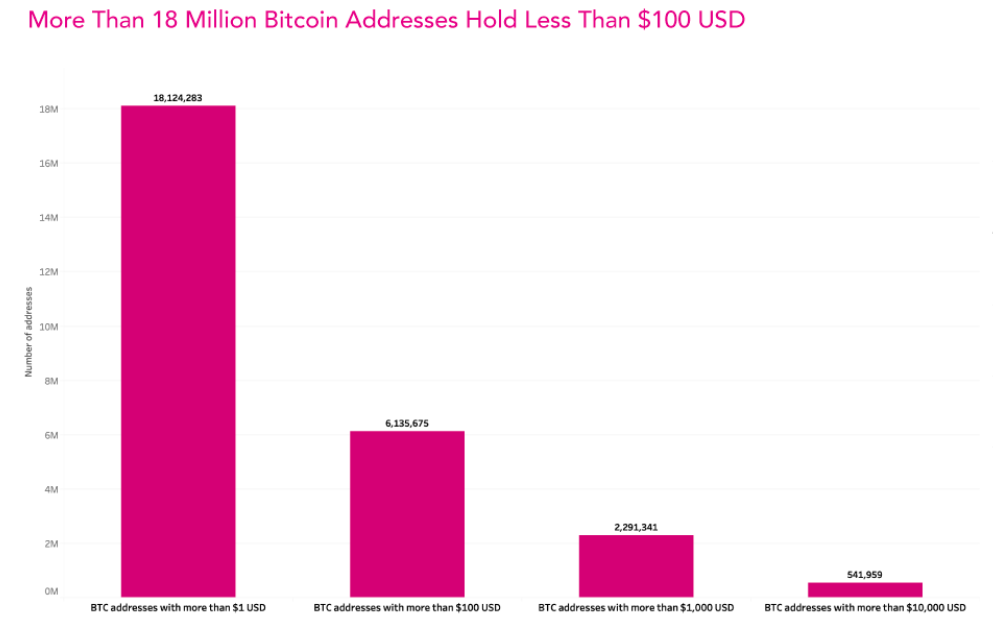 On the other end of the chart, only 541,959 addresses hold over $10,000 worth of BTC. Analyzing this disparity of Bitcoins held between the arrays of addresses, the report stated,

“While this distribution may be a positive sign that Bitcoin is not just for the wealthy, high transaction fees could pose an obstacle for small holders.”

The report added that the transactions fees recorded earlier this year was quite low, implying that Bitcoin could be used as an ‘effective, daily payment tool.’ However, with the hike in the fees mid-year, the cost of a transaction being processed in the next block is as high as $2.54.

On the importance of the transactions fee balance in relation to the overall picture of Bitcoin, the report read,

“Transaction fees serve as an incentive for miners to play a functional role in Bitcoin’s governance. They are determined by factors such as how congested the Bitcoin blockchain is at the time the transaction is taking place.”

Given the fixed fee structure of Bitcoin the economies of scale are skewed, as on one hand, the whale movement will result in meager transactions fees while on the other small transactions are too costly in reference to the fees amassed to implement the same. Hence the transaction structure, in itself, provides an incentive to hoard and send large sums of Bitcoins and discourages to small, unkempt reserves, acknowledging the above 18 million addresses that record under less than $100 of BTC.

In light of the conundrum between transactions fee and the address distribution, the report concluded,