Analysts Warn Bitcoin Price Has Further to Fall, Why $6,800 is a Possibility

Just as fast as Bitcoin (BTC) began to rally, the crypto market has begun to falter. In the past week, the leading cryptocurrency has lost approximately 15% since its local peak — $9,100 — as altcoins have posted similar losses.

Since Tuesday’s drop, however, the selling pressure has widely subsided, with Bitcoin finding a semblance of local support in and around $7,700. Despite this short-term reprieve, a number of analysts, from newcomers to market veterans, expect for BTC to fall lower in the coming days.

The thing is, this dip may not last for long, and may actually present investors, especially those looking to make an entree into cryptocurrency, a perfect opportunity to “stack sats” (accumulate) for the long run.

Last week, Bitcoin finally showed signs that it was topping. As reported, BTC broke below a descending channel and medium-term trend line, topped twice around $9,000, and failed to close daily candles above the ever-important resistances $8,800 and $9,000.

More importantly, the asset’s weekly candle was an Evening Star Doji, marked by a skinny body and long wicks, which meant a reversal in the eyes of most analysts. 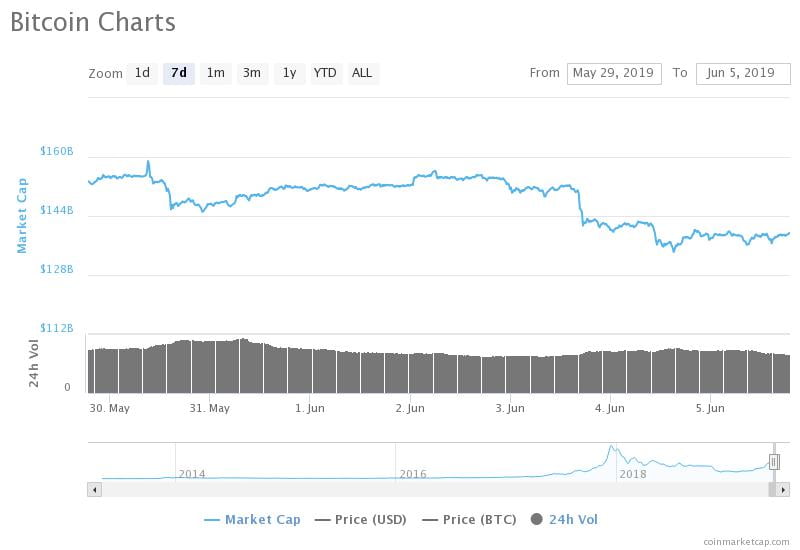 To the surprise of few, Bitcoin did top, subsequently falling from $8,700 to a weekly low of $7,450, to then recover to $7,800 where the asset sits now. Some believe that the cryptocurrency market may continue to slip. Trader Walter Wyckoff noted that if BTC is mirroring price action in 2015 — during which this market went parabolic, saw a brief retrace, and then continued higher — it could fall to the low-$6,000s, or even the high-$5,000s.

Last thing then I am off to bed, last time BTC retraced it lasted 20 days, but now we are moving faster, I don’t expect this “buy the dip time” to be longer than MAX 2 weeks, since we are moving 50% faster compared to previous bear market. Don’t think too much before pressing BUY pic.twitter.com/0Eswzw7BLj

Analyst Moon Overlord has echoed this pseudo-prediction. In a thread, the popular commentator remarked that a 35% correction to approximately $6,000 from the $9,100 peak may be healthy, as BTC bouncing off support at those levels would build a long-term base for the cryptocurrency’s expected “moon shot”.

Some have been a bit less cynical. On Twitter, legendary cryptocurrency investor Trace Mayer explained that he expects for Bitcoin to undergo a “gentle retreat” to anywhere from $6,500 to $7,500. His peer, Adamant Capital partner Tuur Demeester, echoed the analysis, writing in a note that his firm’s indicators now read “greed” after “capitulation”.

Using this information, Demeester remarked that a 2012-esque correction could be experienced, during which BTC may fall to the range of “between $6,800 and $7,680”, which is a 27% to 44% retrace of the upside rally.

As hinted at earlier, this dip may actually be a chance for investors to get their fingers on the buy trigger, not sell. Per previous reports from NewsBTC, popular analyst DonAlt suggested that if an investor had dollar-cost averaged into Bitcoin every single day for the last year (starting from June 4th, 2018), their cost basis would actually be $5,500, implying a profit. With this, Don explains that “if you’re bullish on something fundamentally, sniping the bottom really isn’t necessary”.

If you dollar cost averaged into $BTC every single day for the last year your average buy-in would be $5500 right now.

If you’re bullish on something fundamentally sniping the bottom really isn’t necessary. pic.twitter.com/8XSsB4ipF4

So with this in mind, some had advised for believers in this asset class to actually keep a close eye on the market, as purchasing Bitcoin, Ethereum, or what have you in the coming dip may net solid returns in the years to come.

What’s also reassuring is that if Bitcoin follows historical trends from here, as it has been over recent months, the ongoing correction shouldn’t take more than two weeks, and should be followed by a return to a market where bulls are in control.

Crypto’s Fundamentals Stronger Than Ever

This begs the question — does Bitcoin really have a future though? On every dip, cynics come out to question the legitimacy and value proposition of digital assets. Most recently, an analyst and investor told gold-loving Kitco that BTC won’t see new all-time highs unless the world’s macroeconomic and geopolitical scene effectively collapses.

Regardless, data suggests that Bitcoin’s fundamentals are stronger than ever, boding well for BTC’s upside potential. Analyst Rhythm Trader explains that there are a multitude of reasons why it’s nonsensical not to be bullish on Bitcoin: BTC has seen nine years of higher lows, the network mining difficulty and hash rate have breached previous highs, institutional and retail adoption is on the rise, and there exist over 8,000 Lightning Network nodes.

Why I think everyone should be bullish on bitcoin: