Digital Money Is Imminent, But No Decentralization in Sight

The custodians of global financial order have been prominent in crypto news recently. The weekend kicked off with the announcement of the International Monetary Fund (IMF) joining forces with the World Bank to launch a private blockchain coupled with a “quasi-cryptocurrency” for training purposes, then continued with the Spring Meetings of the two organizations’ Boards of Governors in Washington, D.C., which ran throughout the whole week.

Although it would be an overstatement to claim that distributed ledgers were particularly conspicuous on the forum’s overall agenda, the program included a series of fintech workshops, as well as at least a couple of major talks relevant to grasping where global regulators stand on some issues pertinent to crypto and blockchain applications. Situated in the context of the IMF’s previous statements and actions, the ideas expressed at the meetings can update our understanding of the intellectual currents that shape how international financial institutions envision the future of blockchain technology.

While JPMorgan Chase’s Youngwood touted the bank’s new digital coin that is used for instantaneous settlement of wholesale payments, the Central Bank of Kenya’s chief talked about mobile-based payment service M-Pesa and ECB’s Cœuré introduced TIPS — a cost-efficient European service for the settlement of instant payments. Allaire, on his part, painted a future marked by a “fundamental redesign of how civic societies work,” in which economic activity is fully automated, effectively eliminating the notion of payments as we now think of them. Notably, he argued that not only the decentralized forms of money underlain by permissionless public ledgers would benefit from the internet-like open design, but sovereign digital money would as well.

Cœuré — the same ECB official who once had reportedly called bitcoin “the evil spawn of the financial crisis” — expressed confidence that central bank-issued digital money would be prominent in the financial system of the future, but warned that “decentralization, if not properly managed, can introduce fragility” to the system.

An overarching motif that loomed large in almost every speaker’s account was trust. However, if Circle’s Allaire was talking about trust in open networks based on public infrastructure for money, in which clearance and settlement are decentralized, other panelists obviously meant a different kind of trust — i.e., trust in the incumbent financial institutions that has to be maintained and preserved.

In an interview after the panel, Madame Lagarde made a nod to blockchain “disruptors,” who are “clearly shaking the system” and “changing business models of commercial banks.” Yet, she sounded much more in line with Cœuré than with Allaire when she remarked that she remains concerned about the trust and stability of the system, and that the IMF doesn’t want “innovation that would threaten stability.”

Interestingly, the IMF head noted, apparently in response to Allaire’s mention that Facebook was expected to roll out its own coin soon, that the organization is watching “data collectors” entering the financial space and is ready to regulate. The remark could be relevant to social services with payment ambitions beyond just Facebook, particularly the Telegram Open Network.

“New Economy Talk: CBDC: Should Central Banks Issue Digital Currencies?” was another event among the Spring Meetings germane to the domain of crypto. Moderated by Tommaso Mancini-Griffoli — the deputy division chief in the IMF’s Money and Capital Markets Department — the event had Deputy Governor Cecilia Skingsley of the Swedish Riksbank and Bank of Canada’s Deputy Governor Timothy Lane pondering the prospects of digitizing sovereign money.

In this discussion, the word “cryptocurrency” was mentioned just once, yet in a rather revealing context. When talking about the possible design and functionality of central bank digital currencies (CBDCs), Riksbank’s Skingsley contended that such an instrument will have to be highly functional and the best at fulfilling citizens’ needs — otherwise, “other versions of money could come in, perhaps cryptocurrency,” implying that government-issued digital money would stand in direct competition with its decentralized counterpart.

Lane expressed a number of concerns over the potential tokenization of central banks’ liabilities, including systemic risks like facilitating bank runs and displacing financial intermediation. He also pointed out that, with the existing cryptocurrencies, “anonymity is a big issue” and any digital instrument that Canada would develop will ensure that law enforcement has access to transacting parties’ data, if needed. By and large, the discussion proceeded along the lines of designing a convenient digital reincarnation of fiat money rather than envisioning paradigmatic changes in the nature of state-issued money that a crypto-libertarian would welcome.

Insights from Finance and Development

The ideas on digital money that most of the financial world’s notables expressed on the floor of the IMF-hosted forum largely resonate with those articulated in the June 2018 issue of the organization’s quarterly magazine, “Finance and Development,” dedicated almost entirely to the future of currency, and heavily focused on the threats and promises of blockchain. This issue — which, at the time of publication, did not make too much of a splash in the crypto community — is nevertheless a remarkable document that captures some themes that seem to remain influential with many financial bosses up to this day. 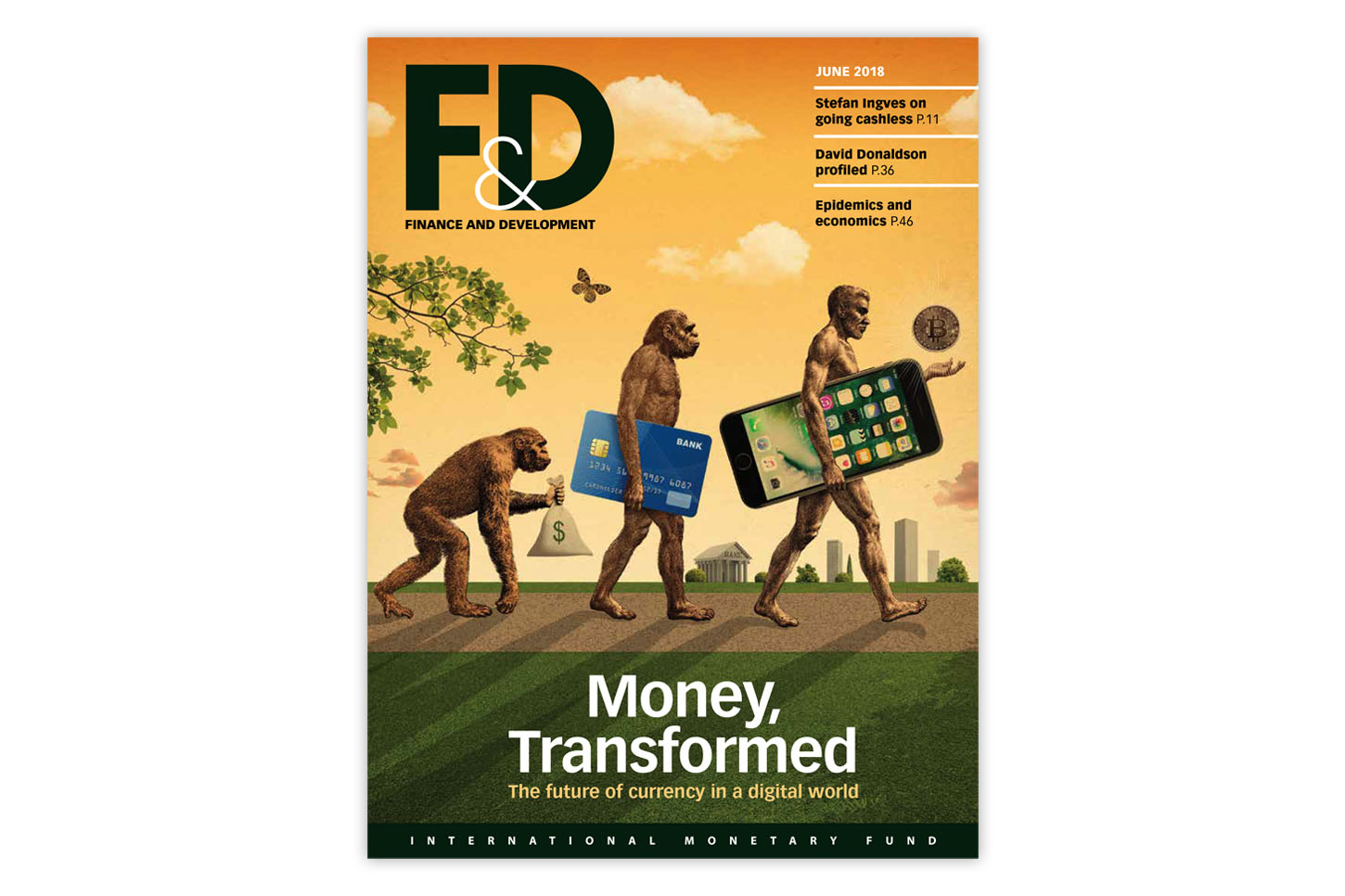 Title page of the June 2018 issue of Finance and Development, a magazine released and published by the International Monetary Fund

Some of the points that the authors raise are hardly shocking. Martin Mühleisen, director of the IMF’s Strategy, Policy and Review Department, acknowledges blockchain’s capacity to revolutionize the world of finance, but reiterates common concerns over its potential to facilitate illicit activities. Andreas Adriano, a senior communications officer in the IMF’s Communications Department, applies Ken Galbraith’s taxonomy of financial bubbles to what he calls “crypto euphoria,” observing that most of the common features of historic financial euphorias are also visible in the irrational exuberance surrounding crypto assets.

In their primer on cryptocurrencies, economist Antoine Bouveret and the assistant director of the IMF’s Strategy, Policy and Review Department, Vikram Haksar, point out that such assets are often costly to produce and that “decentralized issuance implies that there is no entity backing the asset.” They also mention that crypto assets might pose a threat to central banks’ ability to conduct monetary policy by weakening their centralized control over the money supply.

Perhaps the most forceful, in-depth and also the most unsettling analysis presented in the issue is the one penned by Dong He, deputy director of the IMF’s Monetary and Capital Markets Department. He affirms that crypto assets challenge the model of state-issued money and the dominant role of central banks, thus presenting direct competition to fiat money — a point that Riksbank’s Skingsley shared the other day. Further, he admits that the rise of cryptocurrencies might foreshadow a paradigmatic shift from account-based to token-based payment systems. He also contends that a situation in which crypto assets come to define the unit of account would mean irrelevance of central bank’s monetary policy.

His solution? Make fiat money — digital or not — a more attractive unit of account and settlement tool, naturally. That is also something we’ve heard a lot throughout the Spring Meetings sessions. But he also adds this to his recipe:

“Government authorities should regulate the use of crypto assets to prevent regulatory arbitrage and any unfair competitive advantage crypto assets may derive from lighter regulation.”

In other words, the analyst suggests that regulation should be there not to protect consumers from fraud — or to stifle the financing of terrorism — but rather, it is needed to protect the dominance of the incumbent financial instruments and institutions. That is a step further from the usual way of rationalizing regulatory pressure on crypto, if at lease a more honest one.

Arguably the most refreshing article of the June issue of “Finance and Development” was written by a historian. Princeton professor Harold James reminds us that “money was almost always an expression of sovereignty,” which is a concise explanation of why crypto enthusiasts shouldn’t expect central banks to cede any of their power to open, decentralized financial systems. James also offers an elegant take on what he calls a “transformational shift in the perception of fundamental value.” He puts it that, in the past, value was created when humans applied labor to nature. In the near future — and bitcoin appears to be a harbinger of this change — value may arise from the application of nonhuman intelligence to stored energy.

Whenever she talks about blockchain, Lagarde almost invariably brings up this ever-recurring maxim: Financial authorities should go about distributed ledger technology with caution, yet make sure that regulation does not stifle innovation. But what does this mean in practice? It seems that, feeling the weight of the responsibility for global financial stability on its shoulders, the IMF is not eager to rush the advent of a decentralized monetary system. Experiments will be tightly controlled, in a sandbox style; jurisdictions that try to shoot ahead too enthusiastically, like the Marshall Islands and Malta, will be reminded that they better simmer down. Stability and trust should remain paramount — and that means stability and trust in the incumbent institutions.

As is visible in the recent discussions and the analysts’ prior work, central bankers globally are well aware of the threat that open blockchains could pose in the near future to the monetary system that they are in charge of. The next decade will almost definitely see the emergence of CBDCs in many jurisdictions, but it is unlikely that these financial vehicles will be fundamentally different from a digitized version of the existing, centrally issued and controlled fiat money. The incumbents have resources to make digital fiat appealing to consumers and the regulatory power to limit competition from potential decentralized alternatives, so it may take a while before blockchain-powered, peer-to-peer financial networks have a chance to give central banks a run for their money.

The latest in the long trail of events since the 2014 shutdown of the then-largest — but now defunct — cryptocurrency...

A crypto exchange has announced that it has renewed its sponsorship of an English Premier League football team for the...

Binance has engaged in official discussions with Facebook and is “very excited” about the libra project, the exchange’s strategy officer Gin Chao told...

Irish Crypto Exchange Bitsane May Have Disappeared With Users’ Funds

Irish cryptocurrency exchange Bitsane may have done a runner with users’ funds. Forbes said Thursday that the Bitsane exchange, which offers...

Ireland-based cryptocurrency exchange Bitsane has apparently vanished, taking as many as 246,000 users’ crypto deposits with it. The news was...

Bitcoin Miner Activity Suggests a Correction May Be Around the Corner

Zilliqa is Proving Itself to be 2020’s Dark Horse

What Analysts are Saying About Bitcoin as It Reaches Overhead Resistance

These factors are now a bottle-neck for Chainlink’s price

Rewardiqa platform takes DeFi to the next level