Bitcoin [BTC], the world’s largest cryptocurrency, saw a significant surge earlier this month, helping the coin break strong resistance at $5,000 and $5,200. Following the great fall of the king coin in early 2018, the Bitcoin ecosystem was struggling with scalability and technological issues, eventually leading to the hard fork.

Bitcoin.org’s Cobra, who is also the co-owner of Bitcointalk.org, has always maintained that Bitcoin was the cryptocurrency to look out for through his various Twitter bouts with prominent personalities in the cryptoverse. Due to his strong, unbridled support for Bitcoin, he has often trashed altcoins for their low market dominance.

Here’s why institutional interest in Ethereum has hiked so rapidly

How does the change in HODLing patterns affect Bitcoin?

In a new Twitter thread, Cobra spoke about the “biggest threat” to the Bitcoin ecosystem. Even though many crypto-enthusiasts believe that governments and technological issues were the biggest threats to the king coin, Cobra had a completely different opinion.

According to the Bitcoin maximalist, users have the potential to signal Bitcoin’s doom. His tweet read, 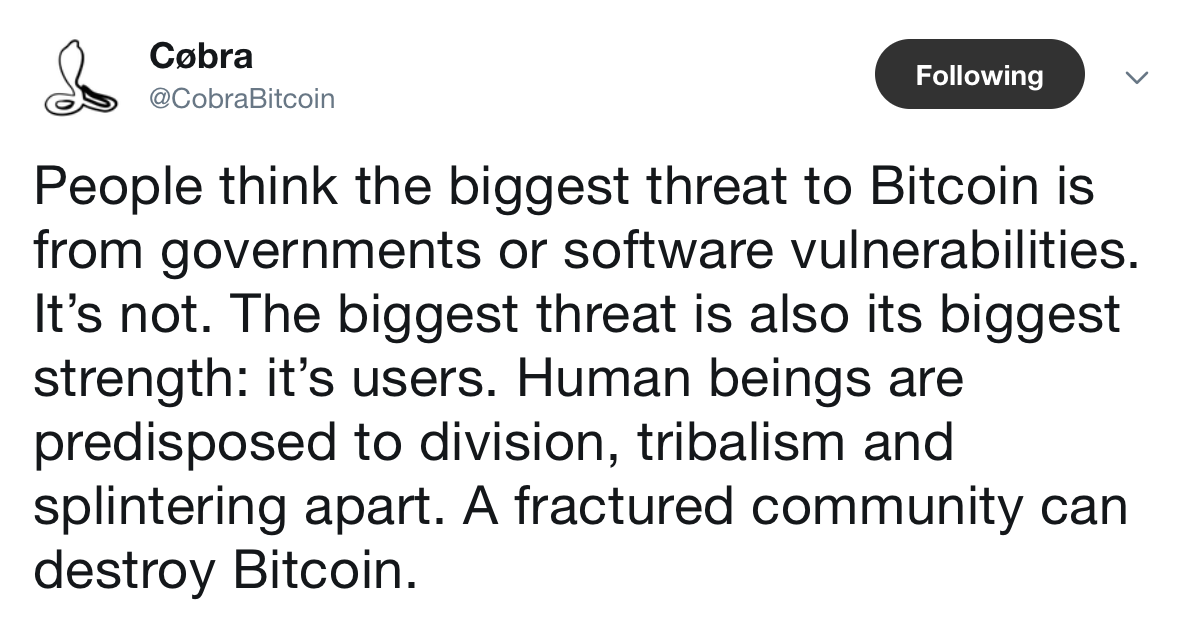 Though most Bitcoin supporters usually support his opinions, this tweet was met with a lot of resistance. Twitterati swarmed the thread in an attempt to prove him wrong. A user named @MrHodl alleged that this could not be true as Bitcoin had “no community.” He added that this, in turn, prevented toxicity in the ecosystem.

“I think there is a community, it’s just not fully representative of everyone with a stake in Bitcoin. Most holders are quiet and not too familiar with what’s going on. There’s people with 1000+ BTC and they don’t engage at all with discussion platforms, just lurk.”

Some Twitter users took it as an attack on Bitcoin investors and opposed Cobra’s stance. A user @CarstenBKK commented,

“Maybe I am lost in translation. What do you wanna tell us? That you are part of Bitcoin network of people owning/using it, but you are just disgusted by the idea, that the network is called community in the sense of direct human collaboration and affection to the groups ideals?”

Previously, Cobra had accused Twitter’s Jack Dorsey and Square Crypto of pandering to Bitcoin users, while also suggesting that the crypto project was merely a way to bring in more users for Dorsey’s CashApp. His tweet read,

“Gotta respect how hard @sqcrypto is pandering to Bitcoiners. Very clever how @Jack has embedded himself in the community; in return the community promotes @CashApp, which gives that service a small but dedicated and activist group of early users.”

Here’s why institutional interest in Ethereum has hiked so rapidly

It is safe to say that Ethereum is no longer playing second fiddle to Bitcoin. While there might be a...

How does the change in HODLing patterns affect Bitcoin?

Bitcoin’s price has made history with its recent movements, especially since it is on its way to price discovery beyond...

Bitcoin’s active supply has played a key role in the price since the beginning of the current market cycle. In...

In the world of fast-advancing financial technologies, one should not be blind to emerging opportunities offered by what is now...

If It Wasn’t For Bitcoin, Gold Would Be $3K

Polkadot (DOT) gains 42% ahead of its long-awaited parachain auctions

Bitcoin price must now hold above these levels to break $60K